I have been absolutely rubbish at this. It’s nearly mid-February and I haven’t written in so long and believe it or not, during this time, I have attended a funeral, wedding, many hospitals and fallen ill.

Better late than never, so here is what I am grateful for the past few days.

I am grateful for listening to my body, choosing not to go for a 4km walk with mum and instead deciding to nap in the car park while she finishes. I was happily asleep with my google-sized sunnies, mouth open and bits of dribble on the sides until a vehicle parked next to me and began opening and closing their doors a gazillion times waking me up, ew. I also didn’t realise I was as exhausted. Also, grateful for having two buns from the චූන් පාන් man.

Getting my eyebrows done after aeons (they came out well) and also spending time with some of my closest friends no matter how tired I was.

Visiting Kalpitiya for the first time for work. Sometimes I really do like the sort of work I do 🙂

Getting my hair and makeup done for my cousin’s wedding and this was the first time I got it done after my sister’s wedding. Such a pleasant little ego boost!

Getting paid on time! I haven’t ever gotten paid on time/a particular day for the past four-ish years. It seems a bit surreal still.

The start of the month of visits to the hospital. Mum wasn’t feeling too great so we had to check it out and meet our favourite GP. Not much to be grateful, but it is nice to know that you can also afford private healthcare, something a lot of us take for granted.

Despite the hospital visit, we treated ourselves to hot pizza. And as seen in the caption below, we decided on being extra AF and ordered a meal for four, just for the two of us. 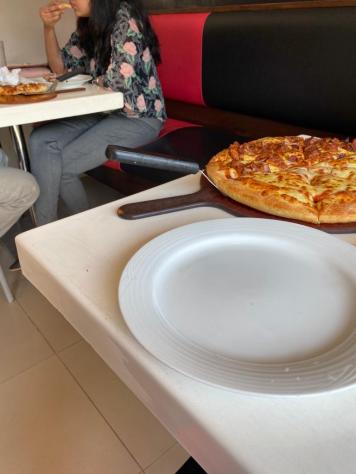 The table next to us had two people who ordered the meal for two.

It was just my mum and I and we ordered the meal for four because we be extra. As always.

I regained new love for mashed potato and gravy. It’s been one of the things I’ve been eating, constantly.

I have also been making a lot of soup this month, in retrospect.

A good day to be in the city because a lot of the people are outstation owing to the long weekend, with tomorrow’s Independence Day holiday. Less traffic, except for the rehearsals bits and quite an enjoyable commute, if I say so myself.

A holiday! It was Independence Day and I managed to sleep in a bit. We went to my Grandparents’ place towards evening and my Mother began a little ‘salon’ and shaved my Granddad’s beard. She seems to be acquiring new skills – just to let you know that she is also great at rough-cut bobs.

Late last night we received word that my (second) cousin had passed away. He was turning 24 this year and had been battling cancer for a few years. My only hope (because I don’t pray as much) is that he is now at peace and is resting.

Managed to get a small walk in, despite the ridiculous amount of dust in Thalawatugoda owing to the road expansion. We also went back to the hospital to show my Mum’s reports, thankfully they were clear and she is okay. This second hospital run and dust was also probably the start of me starting to fall ill.

On another note, I went to Decathalon and didn’t buy anything, because I actually didn’t need anything. I also had kottu roti for dinner. What a win.

I woke up with a fever and probably not in my best spirits. A long day with a constantly runny nose. I avoided popping an antihistamine in case I wouldn’t wake up early the next morning to go to Gampola. Still grateful for health.

I also heard the BEST piece of information today and I can’t be happier! Of course I can’t put these details out (it’s not pertaining to me) but let’s just say that while my year has been continuous buckets of shit so far, this little piece of news has made 2020 so worth living I even made #AlmostAccidentlyVegan pumpkin soup to celebrate!

Another hospital day. This time in Gampola as my aunt was sick. I was also told that I am going in search of germs.

Oh and on a funnier note, while I was at the hospital,  I was wearing a mask because I was unwell already and didn’t want to be sicker/make the others sick. While waiting outside of the ward, in between the ward my aunt was in and the paediatric ward, an old lady from the paediatric ward comes up to me to tell her that she is leaving. She goes on to say that she (the child) was the one in so and so bed and that they are okay and are going home. And for those three minutes, I BECAME A DOCTOR!

My mum had an event in the morning, and towards the evening, I was back at one of my favourite places, Hemas Thalawatugoda (the same hospital I went to with Mum). This time for my cousin, who hadn’t been feeling too well. We showed him to our favourite GP and ran some tests. I think the situation it’s not too serious.

What were you grateful for these past few weeks?

PS – I have a Facebook page that I’m still not too comfortable throwing around, but want you all to (secretly) know about 🙂